In 2021, there were 91 races for Arabian horses in France run from mid-January until the end of November, 37 races for three-year-olds and 49 for older horses. The total prize money was €3,098,000. The leading horse was HOGGAR DE L’ARDUS (FR) by MISTER GINOUX out of ALFA DE L’ARDUS by TIDJANI; This horse earned €613.425 in prize money for just five races including the QATAR ARABIAN WOURLD CUP. Which represents an average of € 118.500.

All two are owned by AL SHAHANIA STUD, property of HH Shaikh MUHAMMAD BIN KHALIFA AL THANI, from Qatar which is a staunch supporter of French breeding and racing.

Number of horses in training

There are over 300 Arabian horses in training in France, with numbers fluctuating throughout the year with the big stables from Qatar sending their horses over to race in France in the summer. They are divided almost equally between three-year-olds and older horses.

Traditionally Arabian horses have been bred in the South-West of France but there are an increasing number of breeding operations in Normandy and in the West. Most of the races are held in the South-West with the more prestigious races being run in Paris and Deauville on the same prestigious cards as the Qatar Prix de l’Arc de Triomphe, Grand Prix de Saint-Cloud, Prix de Diane Longines and more. In 2021, 18 racecourses hosted Arabian races in France. 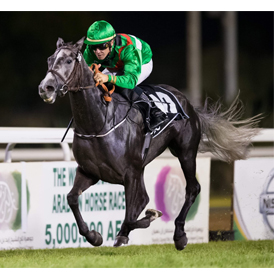 2015 was an outstanding year for French bred Arabians abroad, with eight Group 1 PA wins (the first Group 1 race of the UAE season was run in December 2014 : The National Day Cup).