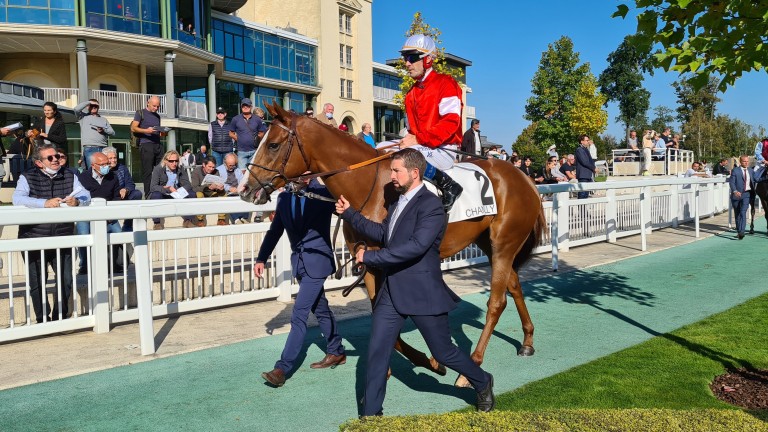 Ante-post backers of Malavath for the Qipco 1,000 Guineas can take confidence from the latest bulletin from trainer Francis Graffard after he confirmed that he is leaning towards Newmarket with his stable star.

A best-priced 14-1 for the Guineas, Malavath lowered the colours of Prix Marcel Boussac heroine Zellie in the Prix Imprudence at Deauville earlier this month, but Graffard expressed concern that she would not be absolutely guaranteed to stay a stiff mile in the Guineas afterwards.

With most of the trials now run and an enthusiastic consortium of owners, Graffard expects Malavath to line up in the 1,000 Guineas rather than wait another fortnight for the Emirates Poule d’Essai des Pouliches at Longchamp.

“We are leaning towards Newmarket,” said Graffard, who saddled Acer Alley to be fourth in the Prix de la Grotte at Longchamp on Sunday. “If she were to stay here the problem is that she’s never run right-handed, while the owners would like to go for the Guineas.”

Malavath could be set for a rematch with Zellie at Newmarket after Andre Fabre confirmed at the weekend that was likely to be her Classic destination.

Acer Alley beat some talented colts in the Prix La Rochette at Longchamp over seven furlongs last September before failing to get home in deep ground over the mile of the Boussac.

The trip again looked to stretch her when travelling into the race well in the Grotte, before failing to go with impressive winner Rosacea.

“She ran well and had a perfect trip,” said Graffard. “I thought she would produce a turn of foot in the straight and she didn’t really accelerate as I was hoping. I have a big question mark over her stamina.

“She produced that turn of foot over seven furlongs last year and not today. She will take her chance in the Poule d’Essai because there is no other race for her, but I think later in the year you will see her over shorter.”