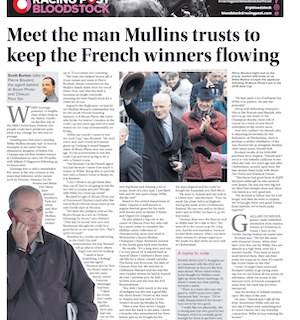 Pierre Boulard is now a familiar figure for many top trainers in Britain and Ireland, and had two runners to cheer in the Gold Cup this season, Al Boum Photo and Kemboy. He’s been a key operator in the success of the French-breds over the Channel for many years. Pierre hails from a family that is all dedicated to racing, with a brother, François, who just retired as head of the racing programme at France Galop, and another, Dominique, who works with Arqana.

Pierre was honoured with an article in the Racing Post on Sunday before the Cheltenham festival under the headline “Meet the man Mullins trusts to the French winners flowing”. Regardless of the 2021 Festival results, the flow has been strong and steady so far!

Pierre Boulard lives near Paris and is a member of the French Bloodstock Agents Association (AFC): https://www.courtiersafc.com/pierre-boulard