Trade was topped by a son of Siyouni offered by Jean-Pierre and Guillaume Garçon’s Haras de l’Hotellerie (lot 549) who seemed to attract interest from every pinhooker on the sales complex. Philip Prevost-Baratte and Paul Basquin were among those who showed the most stamina but ultimately had to admit defeat at the hands of Italian agent Marco Bozzi, who signed the docket at €90,000 on behalf of Tom Whitehead’s Powerstown Stud. The flashy bay was bred by Antoine Sauty de Chalon and is a half-brother to the Listed scorer and Gr.1 placed COUP DE THÉÂTRE. “Tom rang me up and asked me to buy him a horse for the breeze ups, commented Bozzi. This one was obvious to me, he has everything: a nice page, a good conformation and obviously Siyouni needs no introduction.”

The sale attracted an extremely cosmopolitan buying bench with purchasers from Australia, Great Britain, Ireland, France, Germany, Spain, Switzerland, Italy, Morocco, the Czech Republic, Slovakia, Poland, Kirghizstan, Hungary, Kazakhstan and many more. The number one buyer by number of horses for the whole sale was Andriy Ostapchuk of Imperial Bloostock, who signed for 38 individuals, closely followed by Chris Richner who was responsible for 34 purchases.

The Autumn Sale included the final yearling offerings for the 2016 sales season at ARQANA, following on the August, v.2 and October sales.

The cumulated average price for all yearlings sold at ARQANA in 2016 reaches €61,181, up 2% from the previous year. The number of individuals to change hands, including private sales, grew marginally to reach 1 096. 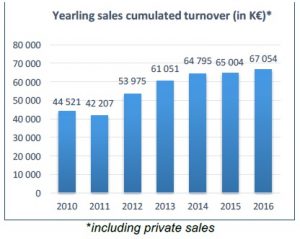 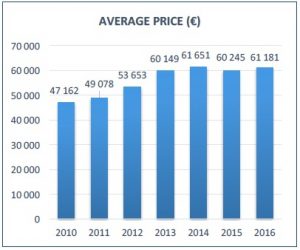 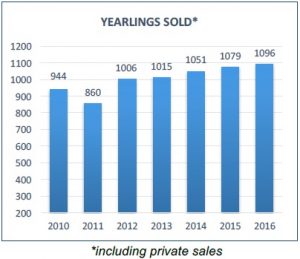 Reflecting on the 2016 season of yearling sales, ARQANA president Eric Hoyeau commented: “This is a satisfactory consolidation of the yearling market, with a record number of horses sold for the third year running. These results pay tribute to the hard work of our vendors, who have consistently upgraded their stock and brought high quality, well prepped individuals to the ring. I believe it also owes to the segmentation of our sales, with each of the four catalogues assembling consistent groups of horses courtesy of a graded format that our buyers are now familiar with and find adapted to their expectations, which is reflected in the clearance rate. I would like to extend our thanks to our buyers from around the world and wish them the best of success with their purchases.”