Acceleration allied to stamina was the combination that propelled the four-year-old Vazirabad (FR) to his sixth win in a row, but easily his most valuable, when he collared Big Orange (GB) and held on by a neck in the Dubai Gold Cup sponsored by Al Tayer Motors.

Christophe Soumillon, riding at 1kg overweight to land his first win in the race and seventh on Dubai World Cup night, oozed confidence as he kept Vazirabad in the second half of the field as the 2014 winner Certerach (IRE) set the steady early pace from Big Orange (GB) and Japan’s Neo Black Dia (JPN), with the rest five lengths and more in arrears.

Even early in the straight, where Big Orange went to the front, travelling well in the hands of Jamie Spencer, Vazirabad was only eighth in the 11-horse field, but once in line for home Soumillon began to make ground on the outside and got to the leader 200m out.

Trainer Alain de Royer-Dupre, welcoming France’s first winner of the race and his second on the world’s richest programme, after Dolniya in last year’s Dubai Sheema Classic presented by Longines, said: “He was behind, but his main quality is his big turn of foot, and we are not afraid to use it. He was a little tired at the end of the race; perhaps he came too early!”

Owner the Aga Khan was also doubling his score at the meeting, having shared Dolniya’s success. His racing manager Georges Rimaud echoed Royer-Dupre’s comments about the winner’s turn of foot, saying: “I was a little anxious when he was behind most of the field, but he handled the turn very well and once he started to improve I knew his very good acceleration would come into play. The second horse has great stamina, so it was an excellent effort from our horse.”

A late-developer, Vazirabad might have been sold out of Royer-Dupre’s stable but for starting a winning run in the French provinces that finally took him to Group 1 success in the equivalent of the French St Leger on his previous outing late last October.

Royer-Dupre said the Gold Cup at Ascot may be too hard a race for the four-year-old, who could revert to middle-distances in Europe.

The first two pulled at least four and three-quarters lengths clear of the field, which was headed by Haafaguinea (GB), who ran well over his longest distance for Godolphin and James Doyle to nudge Richard Fahey’s stable newcomer Suegioo (FR), ridden by Paul Hanagan, into fourth place by a nose. 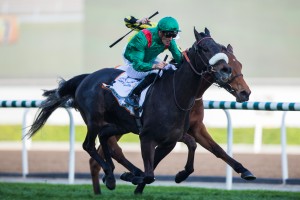