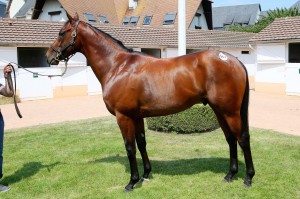 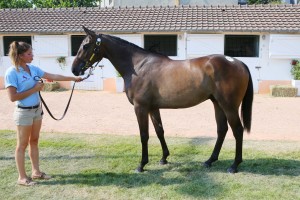 A colt by the in-form first crop sire Zoffany topped the first day of the ARQANA Summer Sale when selling for €160,000 to Laurent Benoît of Broadhurst Agency. Catalogued as lot 67 and offered by Mocklershill, the bay will stay in France to be trained by André Fabre for an undisclosed client.

Overall, the first session of the two-day sale saw 98 lots sell for €2,317,000, down 26% from a year ago, while the average dipped slightly at €23,643 (-2%). The clearance rate was 57% against 73% in 2014. Looking at the different categories on offer, the flat-bred 2-year-olds and two-year-old stores registered similar results. The average price on both segments progressed slightly and turnover remained stable, but the market proved more selective and the clearance rate settled at 57% for the breeze up juveniles and 56% for their NH-bred contemporaries.

The highest price in the store section came in the shape of MON PRESTIGE (lot 171), a two-year-old gelding by Kapgarde out of Prestige Girl, hence a full brother to the dual Group 3 winning hurdler LORD PRESTIGE. Bertrand Le Métayer paid €100,000 for the Channel Consignment offering on behalf of James-Douglas Gordon, whose colours have notably been carried this season by star hurdler and Arqana graduate BONITO DU BERLAIS, who completed a series of eight consecutive victories at Auteuil, five at Graded level. Le Métayer also signed for lot 184 at €65,000 on behalf of the same client. Aged three and consigned by Ecurie Prévost-Baratte, LE PATRIOTE is a Poliglote half-brother to the Grade 1 winning hurdler LA SEGNORA.

The two-year-old MIDSHIP DAVIS (lot 157), a son of Poliglote consigned by Haras de Grandcamp, sold for €90,000 to Royan-based trainer François Nicolle and will be campaigned over jumps for a partnership involving one of the leading conditioners on the flat, Jean-Claude Rouget.

Later in the day, lot 161, a two-year-old Saint Des Saints half-sister to the multiple Grade 2 winning hurdler and Grade 1 placed chaser IRISH SAINT, was knocked down for €70,000 to Peter Vaughan’s Moanmore Stables. She was offered by Haras du Mâ.

Half an hour after the sale-topping colt, lot 87, a colt by Sea The Stars out of the Listed-winning mare Stunning, commanded €78,000 from Magnolia Racing, with Chantilly trainer Pia Brandt doing the bidding. The grandson of multiple Group 1 winner Gorgeous was offered by The Channel Consignment.

Lot 90, from the Mocklershill draft, went the way of Anne-Sophie Yoh of F.B.A. for €70,000. This colt’s dam is an own-sister to the smart sprinter Needwood Blade and he will carry the colours of Valentin Bukhtoyarov.

The sale continues tomorrow at 11:00am with 210 horses in training set to go under the hammer.