The veteran handler has a glittering roll of honour in the saddle and his ability to travel horses internationally has never been questionable with wonder filly Goldikova winning him three Breeders’ Cup Miles.

Head had been brimming with confidence in the days building up to the 1800m event and that confidence was transformed into sheer equine brilliance as his grey forged clear under Maxime Guyon.

Guyon swung relatively wide into the straight but appeared to have his nine rivals covered from some way out and he steered the five-year-old to a thumping four-and-a-half-length triumph over French Derby winner The Grey Gatsby (Assimilated FR), with Msawish (USA) a further three-quarter lengths adrift in third.

An impressive-looking individual, Solow had been raced over longer trips but has been a revelation dropped in distance and has now won his last five starts.

“This was a big test for the horse as he had never run in a Group 1 race but I could not have had him better and he has shown what a good horse he is,” said an ecstatic Head.

“Maxime rode a perfect race  – he was quiet and cool and he is among the best there is. This has been a long time coming with this horse but we now have him 100% and had to geld him to try to curb his growth as he was getting so big.

“This is my first ever winner in Dubai and it is brilliant as I love the place and I love coming here. I am thrilled too as I also train for HH Sheikh Hamdan bin Rashid Al Maktoum.”

“I can’t tell you how good this horse is – he is a world champion. He can quicken and do anything you ask of him.
“The aim now is to come back and win this race again next year, but before then we will look at the Queen Anne at Royal Ascot.”

Guyon added: “That was unbelievable. We thought coming here that he was a very good horse and he was very easy to ride. Good horses make this job easy.

“This is my first Group 1 in Dubai so this win is an honour.”

The Grey Gatsby was having his first outing since beating Derby winner Australia in Ireland last September, and the four-year-old finished an honourable second under Ryan Moore.

His trainer Kevin Ryan said: “I was delighted with him. The winner has run well but my horse has run a good race and he’ll come on for it.

“I’d say we could go on to the Tattersalls Gold Cup at the Curragh now, and hopefully then Royal Ascot.” 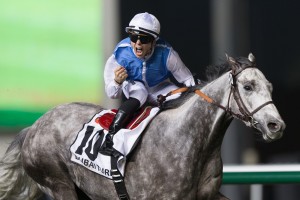