The Aga Khan’s Dolniya (FR), trained by Alain de Royer-Dupre and ridden by Christophe Soumillon, made it a memorable hour for France at Meydan when running out the easy winner of the Dubai Sheema Classic presented by Longines.

In following on from the victory of Solow for Freddy Head and Maxime Guyon in the Dubai Turf, Dolniya also provided Soumillon with a double on the night after his win in the UAE Derby as she accounted for her high-class rivals in effortless style.

Soumillon said of his victory: “She was in very good form, the pace suited us. I was a bit scared before the race that the pace would be slow, so I came out fast in case I needed to make the running, but the pace was good and she accelerated well.”

Royer-Dupre had been confident of a big showing from Dolniya, describing her earlier in the week as a filly who had “improved throughout her three-year-old career and again from three to four.”

Dolniya broke alertly under Soumillon from gate two and led briefly before allowing Just The Judge (IRE) and Andrea Atzeni to take the lead and set steady fractions until the race began in earnest at the head of the stretch.

Japanese hopes One And Only  (JPN) and Harp Star (JPN) were in close attendance as Breeders’ Cup Turf winner Main Sequence (USA) improved his position after being slowly away behind Flintshire (GB) and Guyon.

In the stretch Just The Judge set sail for home, but her move was quickly covered by Dolniya and Soumillon, who took up the running with an impressive turn of foot and put the race to bed a long way from home, stopping the sponsor’s clock in 2.28.29.

Flintshire ran on to take second, two and a quarter lengths behind and never able to get in a serious blow at the winner, with One and Only (Cristian Demuro) staying on for third, another two lengths adrift.

Guyon said of Flintshire “I was able to follow the winner, but I could never catch her. We met a really good filly.”

Of the rest Main Sequence got into a good position but failed to deliver his usual closing kick, fading to seventh spot, just behind the early leader Just The Judge.

Hong Kong Derby star Designs on Rome (IRE) came from a long way off the pace for fourth spot, without ever looking to get closer, but jockey Joao Moreira was happy with his horse’s effort.

“The trip over here took its toll, but he put a lot of fight and heart into the race.” 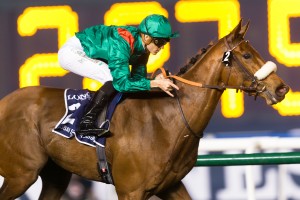