The $6m Dubai Turf, sponsored by DP World, has a new name this year but keeps its tradition of being one of the the strongest races on the Dubai World Cup card.

Ten have been declared and there’s a strong French connection with both Solow (GB) and Cladocera (GER) trained in France, as well as last year’s Prix du Jockey Club hero The Grey Gatsby (IRE) in the field.

Trained in England by Kevin Ryan, The Grey Gatsby finished his highly successful three-year-old campaign with victory in the Irish Champion Stakes under Ryan Moore, who has only been beaten once on the horse.

The pair will be combining for the fifth time on Saturday. “Obviously Ryan knows the horse very well,” said the trainer.
“He seems in good nick and we are exited to be here with a horse with such a good chance.”

Alain de Royer-Dupre saddles Cladocera in a race French-trained horses have landed twice, and she is seeking her third Meydan victory of 2015 having already won both the Balanchine and Cape Verdi.

Both those races are restricted to fillies and mares and this a lot tougher but Godolphin’s Sajjhaa did manage to win all three races in 2013. Cladocera will again be ridden by Christophe Soumillon.

“We know conditions suit her,” said Soumillon. “She has won well both times and should go well in what is obviously a lot tougher race.”

Maxine Guyon rides Solow, trained by Freddy Head and winner of his four most recent outings, including his prep over 1600m at Chantilly at the beginning of the month.

“He seems nice and relaxed and has taken the trip in his stride,” said Head. “We are hoping for a good run on Saturday in what looks a very strong race.”

A Meydan winner last year when trained in France, Frankie Dettori’s mount, Mshawish (USA) has been transferred to the States and joined Todd Pletcher.

The move has been vindicated and Pletcher’s charge arrives here having won his last three starts, including two this year and most recently in Grade 1 company at Gulfstream.

Italian born but based in England, Marco Botti trains Euro Charline (GB), winner of the Grade 1 Beverley D Stakes at Arlington Park on her most recent outing in August.

Joao Moreira is an eye-catching jockey booking (Moore rode her at Arlington). Paulo Sirigu has been aboard her all week and said: “She is not the easiest in the mornings but I get on well with her.

“She seems happy, fit and well which is all we can ask for.” 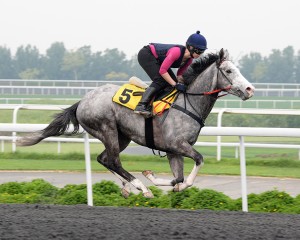