French trainer Freddy Head has not made many mistakes in his career, neither as a jockey, nor as a trainer. But by his own admission he did fail to recognise that despite coming from a proper stayer’s family, his Group 1 Dubai Turf sponsored by DP World contender Solow (GB) is actually a true miler.

“Yes,” he laughed. “It’s very funny because he is bred to stay 2400m, even further than that. So that is why I made the mistake as I ran him over longer trips all the time and one day I decided to run him over the mile (1600m) and that is when things started to go better.”

As soon as he was dropped back, things actually improved tremendously for the grey son of Singspiel. In fact, from having won a few conditions races over 2000 and 2400m, he went on to lift a Group 3 over the shorter trip at Deauville before ending the season with a convincing win in the Group 2 Prix Daniel Wildenstein at Longchamp.

“I did a wrong thing,” admitted Head, who is delighted to be back in Dubai.

“He only has stayers in his family and actually he has so much speed. And it was amazing because at home I had always worked him with very good milers like Anodin and he was going with them. And I kept saying he will be a champion over 2400m, but finally we cottoned on to that the 1600m was his trip.”

Solow is currently looking in great form and his handler confirmed: “He looks well, he adapted well, his action’s good. At home we work on sand, it’s not the dirt but it’s very close to it. So for the moment everything is fine. We know him well and  I have great expectations.”

Head is not the only one who is hoping that Solow can win on Saturday. He is the firm favourite with a lot of racing fans and the trainer concluded: “I think he is the best chance I have had here in Dubai. He is a very nice horse and is improving all the time.” 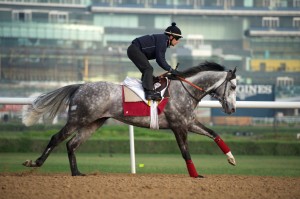