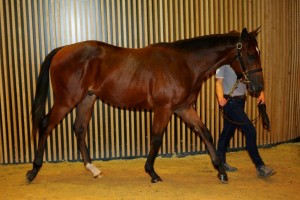 Today at Deauville the third day of the October Yearling Sale was held, a session with 149 lots on offer. 78.5% of them changed hands at a most satisfactory average sale price of €25,427, a figure which was up by nearly 12% on the equivalent day last year. The median remained stable compared to 2013 at €20,000 while the turnover reached €2,975,000.

Ecurie des Monceaux led lot 362, top price of this third day at €140,000, through the ring – a yearling colt from the first crop of Epsom Derby (Gr.1) winner Pour Moi.  The colt was the object of a fierce bidding war between Rupert Pritchard Gordon, Ghislain Bozo, Henri-Alex Pantall and Sylvain Vidal.  It was eventually the latter who had the last word and got his hands on this second foal out of the young mare Freeing, a close relative of the Middle Park Stakes (Gr.1) winner Awzaan and the Group 3 winner Muraaqaba. Following the aforementioned lot through the ring, lot 363 also produced a high score when the hammer fell at €110,000. This was a Le Havre half-sister to the black type horses So Will I and Sand Vixen, a Group 2 winner in England. Jan and Maja Sundstrom (Team Hogdala) became the lucky owners of this filly they know very well as she was born and raised at the Haras de Coulonces on behalf of Mette Campbell.  The Swedish couple had also bred the sire of this yearling filly Le Havre, who is having such incredible success with his first three year olds including the excellent Avenir Certain, author of the magnificent Poule d’Essai des Pouliches (Gr.1) / Prix de Diane (Gr.1) double. Le Havre was actually in the limelight throughout the day at Deauville. In the evening lot 477 consigned by the Elevage de Tourgeville, posted €135,000 on the sales ring board. This son of the Listed placed Polysheba benefited from a good update with his two-year-old full brother Plumetot having won on Monday at Clairefontaine on his third start. Anthony Stroud’s assistant signed for the horse. The colt will now go into training with James Fanshawe, trainer of 2014 du Prix du Cadran (Gr.1) winner High Jinx. Le Havre also made his mark in the sales ring this afternoon through another filly in lot 381 who was knocked down for €45,000 to Umm Qarn Farm. Consigned by the Haras de la Reboursière et de Montaigu, she was bought as a breeding prospect as she is a daughter of the young broodmare High Ville, a Highest Honor half sister to Kadance Ville,  winner of the prix André Baboin (Gr.3) and dam of Guest Ville, second in the Prix Noailles (Gr.2) and third in the Prix Daphnis (Gr.3). Beforehand, she will attempt to prove herself on the track and will remain in France in order to do so. The Qatari outfit was also seduced by another daughter of Le Havre in lot 409, presented by La Motteraye Consignment. €45,000 was the amount necessary to secure the filly, the very first offspring out of La Mouche, a dual winner at two and placed in the Prix La Camargo (L.) at three.

Haras de Colleville based sire Kendargent has also proved extremely popular since the beginning of the sale. Today lot 444, consigned by the Haras des Sablonnets, posted a sale price of €69,000 under the drive of Chantilly based trainer Nicolas Clément who eventually landed this athletic colt who is the first yearling out of a sister to Fontcia, winner of the Prix Rose de Mai (L.) and placed in the Coupe de Maisons-Laffitte (Gr.3). Much earlier in the day, another representative of the Guy Pariente owned young sire, lot 348 presented by the Haras de Grandcamp, held everyone’s attention. This was a son of the unraced mare Escolhida, a Montjeu three parts sister to the excellent Septimus, winner of the Irish St Leger (Gr.1) as well as numerous Group 2 and 3 races. The Saudi Abdullah Al Maddah, who was already active on the first day of the October yearling sale as well as in August, secured the horse with a final bid of €45,000.

Just as with Pour Moi, the success in the sales ring of Canford Cliffs’ first yearlings confirmed the strong demand for the progeny of first crop stallions who excelled on the track. A genuine champion over a mile, Canford Cliffs, who stands at Coolmore in Ireland, landed no less than five Group 1s throughout his career including the Irish 2000 Guineas and the St James’s Palace Stakes (Gr.1) at Royal Ascot. One of his very first yearlings, lot 400, sold for €65,000. This Daniel Chassagneux (Haras de Bois aux Proux) bred horse was knocked down to Crispin de Moubray standing alongside Irish pinhooker Paddy Twomey.

Lope de Vega left his mark on the 2014 October yearling sale, thanks most notably to lot 56, second top price of the sale overall and knocked down on Monday for €270,000. His only representative offered today, lot 442 presented by the Haras d’Etreham, changed hands for €52,000.  This colt out of a sister to the Listed winner and Group 3 placed in the United States High Maintenance wound up in the pocket of bloodstock agent Anthony Stroud. He will be added to the draft of an Irish Pinhooker who will prepare him for one of the Breeze Up sales next year.

€52,000 was also the sum spent by Broadhurst Agency on lot 460 hailing from the Haras des Capucines. This is a daughter of the proven sire American Post out of the Listed winner Numerieus. Laurent Benoit signed the docket on behalf of Steve Burggraf, who used to be with the La Boetie Racing syndicate, and who was buying his second filly today having bought a daughter of the Prix Marcel Boussac (Gr.1) winner Amonita at the August sale.

The sale continues tomorrow from 2 PM