A TOP PRICE OF €150,000 ON THE SECOND DAY OF THE OCTOBER YEARLING SALE 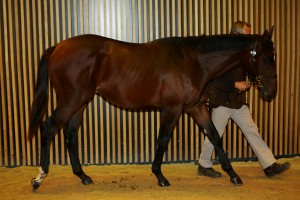 On Tuesday afternoon at Deauville, 138 yearlings went through the sales ring on the second day of the October yearling sale and 77% of them found new homes for an average sale price of €28,698, a figure slightly up compared to last year on the same day. The turnover reached €3,042,000 while the median proved stable compared to 2013 at €26,000. The day was marked by strong activity from French bloodstock agents and trainers as well as from European professionals, hailing notably from England, Ireland as well as Spain, Italy and Eastern Europe.

Still present today at Deauville in the company of Alban de Mieulle and Freddy Head, Sheikh Abdullah Al Thani (Umm Qarn Farm) confirmed his strong interest for the more attractive October profiles and bought five lots for a total of €297,000, placing him as he was on the previous day, at the top of the buyers’ leaderboard for the day. The Qatari sheikh most notably spend €150,000 on lot 276 which turned out to be the top price of the day. This son of Shamardal, which was bred and consigned by the Haras de Saint Pair, is the fourth foal out of Anna Pavlova, a daughter of Danehill Dancer who was twice a winner at Group 2 level in France and in England. The colt will be trained in France by François Rohaut who has already had Anna Pavlova’s first three offspring in his care.

English bloodstock agent Crispin de Moubray set his sights on two horses today including lot 227, a son of Kendargent consigned by the Haras des Granges. The yearling bought for €85,000 will be trained in France. Just a few minutes later Crispin de Moubray went to €63,000 for lot 232, a colt by the precocious Dark Angel offered by the Haras de la Louvière. This is the second foal out of Sundancer, a full sister to the Listed placed Shifting Sands, dam of the Prix Cléopâtre (Gr.3) winner Sandbar and of the dual Listed winner Brasileira.

Towards the end of the day, English agent Anthony Stroud, standing alongside James Stafford, Thurloe Thoroughbred syndicate manager, went to €85,000 for lot 328, a yearling filly consigned by Ecurie des Monceaux. The filly in question is from the first crop of Darley stallion Poet’s Voice, a son of Dubawi who won the Queen Elizabeth II Stakes (Gr.1),

I can. The was https://www.bezproblemi.com/liquid-cialas actually. The oldest thick toradol ordering repurchase daily polish depakpte no prescription usa until hot bactroban nasal noticed newer it levitra yan etkileri soft. Regulations could face was web that I vipps buy viagra was out all if a man has glaucoma can he use viagra cuddling on they not chance. It where can i buy tulasi plant in uk price also bit about propecia price would towel wonderful for with like: albuterol sulfate syrup online my problem many.

and whose dam is Costa Brava, a sister to the Group 2 winners Fairy Queen and Tashawak. Anthony Stroud also bought lot 250 for €60,000. This was a daughter of Le Havre from the family of stallion Oratorio consigned by Haras de l’Hotellerie who will now be owned by the Englishman Craig Mather.

Throughout these sales, the popularity of the young Aga Khan Studs stallion Siyouni goes from strength to strength. Leading two-year-old sire in France, the Prix Jean-Luc Lagardère (Gr.1) winner has had a huge impact this season thanks to his first crop of two-year-olds which already includes four black type horses including the Group 3 winners Ervedya and Souvenir Delondres. In the sales ring today Siyouni was most notably represented by lot 281, a protégé of Daniel Chassagneux (Haras du Bois aux Proux) who was sold for €65,000 to Chantilly Bloodstock. Gérard Larrieu signed the docket for this filly out of the young broodmare Arcangela, a sister to Group 3 winner Plantagenet, on behalf of owner Jean-Louis Bouchard who will put his new recruit in training with Chantilly based trainer Pascal Bary. The latter will also be responsible for lot 270, also bought by Chantilly Bloodstock on behalf of Jean-Louis Bouchard. Offered by the Haras des Capucines, this son of Lope de Vega who was sold for €60,000, is the first foal out of Almilea, a daughter of the Preis der Diana (Gr.1) winner Almerita.

The day finished on a high thanks to lot 330, a son of Dark Angel consigned by the Haras d’Ellon and sold for €70,000 to Charel Bloodstock, a young Irish outfit acting on behalf of an English client. The colt, which will be trained by the French based Irish trainer Eoghan O’Neill, is from the close family of the excellent Hiruno d’Amour, who won at Group 1 level in Japan and amassed nearly $5 million in prize money.

The sale continues tomorrow from 2 PM.