SECOND RENEWAL OF THE V2 SALE: A RECORD HIGH PERCENTAGE OF HORSES SOLD FOR A YEARLING SALE 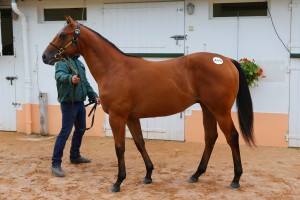 Just like it did last year, the sale met with a very favourable reception from French industry professionals as well as from buyers hailing from all over Europe and from Irish pinhookers who were putting together their  drafts  for next  year’s  Breeze  Ups.   Jean-­‐Claude  Rouget  proved  very  busy  today  and  bought  eight yearlings for a total of €288,000.

Two yearlings  found buyers for the sum of €90,000  during the evening.   The first lot 442 consigned  by Haras  de la Perrigne,  was bought  by Mont-­‐de-­‐Marsan  based  trainer  Antoine  de Watrigant.  This colt by Dubai Destination is none other than a half brother to the precocious sprinter Dibajj who landed the Prix du Petit Couvert (Gr.3) last year. Just a few minutes later lot 446 consigned  by the Haras des Capucines made  the  same  amount.  It  was  Peter  Doyle,  acting  on  behalf  of  English  trainer  Richard  Hannon,  who secured  the  colt  after  some  lively  bidding  against  Jean-­‐Claude  Rouget,  as  well  as  pinhookers  Alban Chevalier du Fau and Roger Marley.   This was a son of Lilbourne Lad out of a Dubawi sister to Festivale, Listed winner and Group 3 placed.   Alban Chevalier  du Fau (The Channel Consignment)  nonetheless  got the  upper  hand  when  it  came  to  lot  404  presented  by  the  Haras  d’Omméel  and  which  he  bought  for €87,000. This colt is a son of Dark Angel who has proved precocious and highly commercial at Breeze Up sales, out of Velvet Revolver, who finished placed on several occasions at Group 3 and Listed level.

Young sire Siyouni  has never ceased to impress  in the last few weeks thanks to his first two-­‐year-­‐olds, which include some excellent horses including Ervedya, now unbeaten in three starts and facile winner of the  Prix  de  Cabourg  (Gr.3)  recently  at  Deauville.  One  of  his representatives  pushed  the  bidding  up  to €85,000  this  afternoon  during  the  v.2  sale.  This  was  lot  400  consigned  by  the  Haras  du  Logis,  a  daughter of  the  Listed  winner  Tianshan  knocked  down  to  Alain  Decrion.  €85,000  was  also  the  price  fetched  by  lot 448, a daughter  of Kendargent,  who has had such huge  success  as a stallion  since  being  retired  to the Haras  de  Colleville.  This  three  parts  sister  to  the  Listed  winner  Royal  Menantie  was  bought  by  RTB Limited, a company belonging to Russian owner Rashit Shaykhutdinov and his partners, who this time relegated  Chantilly-­‐based  trainer  Nicolas  Clément  and  Guy  Pariente  to  the  role  of  underbidders.  Guy Pariente’s stallion Kendargent continued to make waves during the v.2 thanks to lot 462 presented by the Haras des Capucines. This colt out of a mare who was a winner at two, was knocked down for €77,000 to the aforementioned Irish pinhooker Roger Marley, who operates from Church Farm.

Elsewhere, three lots found takers for the sum of €75,000. The first was lot 390, another representative of the Aga Khan stallion Siyouni, who twice won at Group 1 level at two. The colt consigned by the Haras de Petit Tellier and knocked down to Sylvain Vidal is a half brother to the good two-­‐year-­‐old Speak Now who has  won  twice  from  three  starts  this  year.  Jean-­‐Claude  Rouget,  bidding  against  his  Chantilly  based opponent Nicolas Clément, also spent €75,000 on lot 410, a daughter of the precocious and popular Dutch Art  presented  by  the  Haras  de  Grandcamp.  A  few  hours  later  another  son  of  Kendargent  was  making waves  in the sales  ring, changing  hands  for €75,000.  Bought  by Charel  Bloodstock,  an agency  based  in Ireland and owned by Vanessa Teehan, the colt, lot 461 presented by the Haras de la Reboursière et de Montaigu,  is a three-­‐part  brother  to Literato,  who  carried  Hervé  Morin’s  colours  to victory  in England when winning the Champion Stakes (Gr.1).

ARQANA chairman Eric Hoyeau commented on the day’s results in the following terms: «We are delighted with the results of the v.2 sale which proved a great success for the second consecutive year with the buyers present  at  Deauville  today.  The  sale  posted  an  even  greater  increase  than  that  witnessed  by  the  three previous days for the August Yearling Sale. Indeed, the percentage of horses sold exceeded 92%, a new record for a yearling sale, while the average sale price was up by over 31% compared to last year, which shows a ferocious  demand  from  buyers  on  the  yearling  market.  The  sale  was  offering  a  more  consistent  draft compared to last year, as a result of a greater selection process and included a high density of horses sold for

€50,000 or more. French agents and trainers were all present while numerous buyers who had already been active on the first three days, most notably Japanese buyers, continued to buy today. These most satisfactory results bode very well for the forthcoming yearling sales which will take place in October and November here at Deauville. »

Full results of the v.2 yearling sale are available online at  www.arqana.com