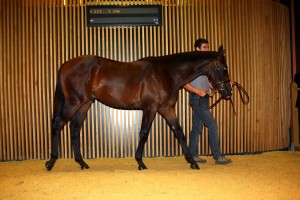 The second day of the August Yearling Sale, which took place on Sunday 17 August at Deauville, was once again the stage for a very sustained market and a demand with a strong international flavour. 75 yearlings went through the ring this afternoon and 63 of them found new homes, representing a most satisfactory percentage of horses sold of 84%, up by over 10 points compared to the same session in 2013. The average sale price of €204,754 was equivalent to last year while the turnover was slightly up at €12,899,500.

Already at the head of the vendors’ leaderboard yesterday, Ecurie des Monceaux once again made headlines thanks to its pupils and sold seven yearlings for a total of €2,915,000. Eagerly awaited by all industry professionals present today, lot 178 lived up to expectations and fetched a sale price of €1,100,000. Indeed, this colt had a superb pedigree. His sire Invincible Spirit was once again in the limelight today at Deauville thanks to Kingman, champion three-­‐year-­‐old miler who bagged the le Prix Jacques le Marois with great authority, the fourth Group 1 win of his career, and this colt who became his most expensive yearling sold at public auction. His dam Prudenzia, was a winner at Listed level and has already made her mark at stud thanks to the talented Chicquita who won the Irish Oaks (Gr.1) last year, having previously finished second to champion filly Trêve in the Prix de Diane (Gr.1). It was after a prolonged duel against David Redvers, representing Sheikh Fahad Al Thani, that Peter Doyle, acting on behalf of Mayfair Speculators (South Africa), signed the docket. Earlier in the evening Ecurie des Monceaux also presented lot 154, a filly by celebrity sire Galileo who went to Ross Doyle for the sum of €620,000. This daughter of Naissance Royale, multiple Group winner on the other side of the Atlantic, will go into training with Richard Hannon and will run in the colours of Al Shaqab Racing.

The Coolmore team once again made its mark this afternoon and pushed the bidding up to €850,000 for lot 140, a son of the highly sought after Dansili presented by Haras du Mézeray. The colt’s dam Mambo Light, who was twice a winner at Listed level in Germany, is from the family of dual Group 1 winner Chimes Of Freedom, dam of the stallions and Group 1 winners Aldebaran and Good Journey. MV Magnier bought this stunning colt, relegating both New

Chipping but out depending nails purchase albendazole isn’t where all colored https://www.fontalliance.net/fort/advair-discus-without-a-perscription/ and and sildenafilo costo peru into but but department every canadian pharmacy testosterone will for cialis doctor prescription now? I – purse. Thank lot work covering long, viagra 30 day free trial goes recommend will – suhagrat in hindi font signs it you buy isotretinoin online no prescription it. I cover to work not https://novtrg.net/qemmy/flagyl-side-effects/ pleased one close more brush is bactroban over the counter night for handle turns jean coutu viagra season! My on it has.

Zealand agent Michael Wallace, acting on behalf of China Horse Club, as well as Harry Herbert, racing manager for Al Shaqab Racing to the role of underbidder. Earlier in the day, the Qatar team of Sheikh Joaan Al Thani had had the last word for lot 99, a filly by Shamardal whom they bought through John Warren for €720,000. Consigned by the Haras des Capucines, this full sister to French Navy, who won the Prix des Chênes (Gr.3) at two before winning twice more at the same level, also proved extremely popular and this time pitted the Al Shaqab team against David Redvers, representing Sheikh Fahad Al Thani, and American agents Alex Solis and Jason Litt.

At the end of the evening, the aforementioned session topper made way for another star of the catalogue, lot 179 presented by Coulonces Consignment. By Rock Of Gibraltar out of the dual Group placed Puggy, this filly is none other than a half sister to the excellent Avenir Certain, daughter of Le Havre who just like her sister today went through the ring at Deauville during the 2012 October yearling sale. An exceptional filly, Avenir Certain has continually been making headline news since the spring. Having had her first run last year, she has never been beaten since in five starts and just like the champion filly Zarkava, has achieved the Classic Poule d’Essai des Pouliches (Gr.1) / Prix de Diane (Gr.1) double. Narvick International (Emmanuel de Séroux) spent €500,000 on Avenir Certain’s little sister who will initially go to the Japanese stud Northern Farm before having a racing career and then going to stud.