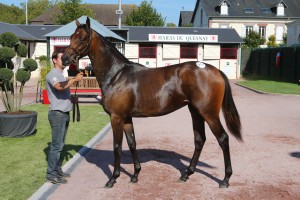 It was one of the very last representatives  of the influential Monsun, lot 11, who proved the most popular in the ring this evening  in Deauville,  and was knocked  down  for €1,200,000  to Tony  Nerses,  who was bidding on behalf of Saleh Al Hamaizi and Imad Al Sagar, owners of classic winner Authorized. Bred in the purple, this bay filly is from the current leading family in Germany. Her dam Sasuela, bought by Ecurie des Monceaux  in foal to the aforementioned  yearling,  has already  produced  the very  good  Samba  Brazil,  a Group 3 winner in Germany and Seismos, a son of Dalakhani who won the Grosser Preis Von Bayern (Gr.1) and  was  again  in  the  limelight  this  afternoon,  winning  the  Geoffrey  Freer  Stakes  (Gr.3)  at  Newbury. Sasuela  is  also  a  sister  to  the  stallions  Schiaparelli  and  Samum,  both  Group  1  winners,  Salve  Regina, winner of the German Prix de Diane, as well as Snawa, who is none other than the dam of the German phenomenon Sea The Moon. This son of Sea The Stars, whose limits have yet to be tested, has run out the brilliant winner of each of his three Group races, including the Deutsches Derby (Gr.1) by 11 lengths and will now be aimed at the Prix de l’Arc de Triomphe (Gr.1) where he will have a very strong chance.

Towards the end of the session another filly, lot 81, pushed the bidding up to €1 million thanks to British bloodstock   agent  Anthony  Stroud  who  held  fast  against  team  Coolmore.  Consigned   by  Haras  de  la Reboursière  et de Montaigu,  she is the result of a mating  between  leading  sire Galileo  and the Group 3 placed Dance Secretary, a young broodmare whose brother Perfect Soul won the Turf Mile Stakes (Gr.1) as well as a two Group 2 races. She now belongs to Mayfair Speculators,  a group of South African investors made up most notably  of Markus  Jooste, who was buying for the first time at Deauville.  The latter also bought  lot 36 for  €700,000,  this  time  through  agent  Peter  Doyle.  From  the  Lagardère/Aga  Khan  « V » family,  this yearling filly consigned by Ecurie des Monceaux is the second foal by champion Sea The Stars out of Vedela, a daughter of Prix Saint-­‐Alary (Gr.1) winner Vadawina. Elsewhere Mayfair Speculators also spent €650,000 on lot 87 consigned by Motteraye Consignment,  a Monsun filly out of the German Listed winner Dubai Rose. All three fillies are likely to stay in training in France.

As always,  Coolmore  proved particularly  busy on this first day of the August sale and ended the day as leading buyer having bought four yearlings for a total of €1,755,000. The Irish operation most notably set its sights  on lot 30, bought  for €850,000,  a daughter  of the proven  Invincible  Spirit,  sire of this year’s champion  miler  Kingman,  out of Tonnara,  an excellent  broodmare  who  has already  produced  Group  1 winners   Most  Improved,   winner   the  St  James’s   Palace  Stakes,   and  Ectot,  winner   of  the  Critérium International (Gr.1) last year. Once again the filly was consigned by Ecurie des Monceaux, who had an extraordinary  day, selling nine yearlings for a total of €4,520,000 putting them at the top of the vendors’ leaderboard for this session.

€600,000  was  the  amount  fetched  by  another  very  well  bred  filly,  lot  39  consigned  by  Haras  de  la Reboursière  et de Montaigu.  Indeed, the filly is the result of a mating between Sea The Stars, who never ceases  to impress  with  his  first  crop  of three-­‐year-­‐olds,  and  Ysoldina,  a sister  to  Belle  Et  Celebre  and daughter of Kendor who was placed several times at Group level including a third in the Poule d’Essai des Pouliches. Chantilly-­‐based trainer Pascal Bary had the pleasure of signing the docket for this filly, standing next to his client Jean-­‐Michel Hegesippe,  fortunate  owner of this year’s Grand Prix de Saint-­‐Cloud  (Gr.1) winner Spiritjim, whom he bought as a yearling at Deauville.

At the very beginning  of the session,  Ecurie des Monceaux  presented  lot 6 through  the ring, a filly who pushed the bidding up to €560,000. This was justified by the filly’s outstanding pedigree, being a daughter of  one  of  the  world  most  sought  after  stallions  in  Galileo  out  of  Royal  Highness,  a  representative  of Monsun  who won the Beverley D. Stakes (Gr.1) in the USA. The latter has already produced the high-­‐class Free Port Lux, a three-­‐year-­‐old colt who won this year’s Prix Hocquart (Gr.2) before finishing fourth in the Grand Prix de Paris (Gr.1) and second in the Prix Guillaume d’Ornano (Gr.2) yesterday at Deauville. New Zealand bloodstock agent Michael Wallace and Freddy Head, who trains Free Port Lux, bid fiercely against each other but it was eventually the former acting on behalf of China Horse Club, who had the last word.

A few hours later, the board flashed up another remarkable bid when a daughter of the highly sought after Dubawi,  lot  79,  went  through  the  ring  consigned  by  Coulonces  Consignment.   This  half  sister  to  the precocious Oh Goodness Me, winner of the Park Express Stakes (Gr.3),  had particularly caught the eye of Patrick Barbe who spent €500,000 to get his hands on her. She will now head to Japan to be raced there before becoming a broodmare.

Finishing  on the second rung of the buyers’ leaderboard,  Mandore  International  Agency  was once again very active here at Deauville and bought 8 yearlings for a total of €1,715,000, most notably on behalf of Al Shaqab (Cheikh Joaan Al Thani, Qatar).