ANOTHER MAGNIFICENT RENEWAL OF THE AUGUST YEARLING SALE 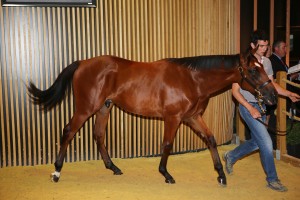 This Monday  at Deauville  the third and last day of the August  Yearling  Sale took place. On this occasion 137 of the 170 yearlings  who went through the ring changed hands, which represents  an excellent percentage of horses sold at over 80%, and generated a turnover of €9,741,000, an increase of 22%. The average  sale price  settled  at €71,102,  a figure  up by 17.34%  compared  to the same session last year. The outstanding lots gave rise to some lively bidding and 34 yearlings were as a result knocked down for €100,000 or more compared to 18 on the same day last year. These yearlings came  from  17  different  studs  such  as  the  Haras  de  Tourgeville,  Haras  des  la  Reboursière  et  de Montaigu, Haras d’Ommeel, Haras des Capucines, Haras des Sablonnets, Haras du Mézeray, Haras de Colleville,  Haras de Beauvoir,  Haras du Logis Saint Germain, Haras des Loges, Haras du Cadran, Haras de Grandcamp,  Haras d’Etreham,  Coulonces  Consignment,  as well as Haras de la Louvière, Ecurie des Monceaux and La Motteraye Consignment.  Though a number of players from the weekend continued their shopping sprees on Monday, new buyers also emerged including most notably French bloodstock agents and trainers such as Jean-Claude Rouget, who finished at the head of the buyers’ leaderboard  for  the  day.  The  Pau  based  trainer  bought  no  less  than  eight  yearling  for  a  total  of €645,000.

Once again Ecurie des Monceaux had another excellent day with 4 of its protégés among the top 10 highest prices of today’s session. Highest of the lot was lot 294, top price of the day and a well bred colt by the Coolmore stallion Fastnet Rock out of the Listed winner Fine And Mellow. The latter has already  produced  two black type horses including  Gloomy  Sunday,  who won the Henry II Stakes (Gr.3) at Sandown.  It took a final bid of €210,000 for the colt to be knocked down to Horse France at the  end  of  a  duel  with  English  bloodstock  agent  Ed  Sackville.  A  few  hours  earlier  Ecurie  des Monceaux led lot 205 through the ring, a filly by the precocious and very popular Exceed And Excel out of the Listed placed Sweetie Time, a young mare from the family of the matriarch Coup de Folie. The yearling filly was knocked down for €165,000 to Anthony Stroud who was acting on behalf of Robert Jeffcock, an English owner who has been successful at the highest level thanks to Siyouma, a sister to Siyouni who was bought at the ARQANA December breeding stock sale.  Elsewhere the Normandy-based stud had another good result with lot 183, a colt by Iffraaj, sire of the dual Group 1 winner Rizeena, out of Raisonnable, who happens to be as sister to Légèreté, a mare who won both the Prix  de  Malleret  (Gr.2)  and  the  Prix  de  Royaumont  (Gr.3).  Acting  on  behalf  of  Darley,  Richard O’Gorman pushed the bidding up to €160,000 to get his hands on the Monceaux consigned colt. The same  agent  also  had  the  pleasure  of  signing  the  docket  at  €190,000  for  lot  217,  a  yearling  colt consigned by the Haras de la Louvière and also boasting a great pedigree. This son of Classic winner Lawman out of the dual Group 3 winner Top Toss is a brother to Dastharon,  second in the Poule d’Essai des Poulains (Gr.1) last year and more importantly to the excellent Lesstalk In Paris, twice a Group 3 winner and placed at Group 1 level.

Sometime  later  Ecurie  des  Monceaux  received  €150,000  for  lot  263,  a  filly  by  Teofilo  out  of Bagarreuse, herself a sister to the Group winners Daneskaya and Silverskaya.  The filly had caught the eye of Chantilly-based trainer Freddy Head, who was standing alongside his client Olivier Thomas. A very new owner Olivier Thomas saw his colours carried to victory this year by another Monceaux graduate named Free Port Lux, a three-year-old colt which he bought here at Deauville and who won

the Prix Hocquart (Gr.2) in May before finishing fourth in the Grand Prix de Paris (Gr.1) and second in the Prix Guillaume d’Ornano (Gr.2)  just three days ago at Deauville.

Early in the day MAB Agency set its sights on lot 209 presented by Motteraye Consignment, a horse which he bought for €155,000. This son of Rip Van Winkle will soon run for the same owner as his Listed placed half brother Frankyfourfingers.

Review of the 2014 August Yearling Sale

The new format, which was tightened last year to 3 days, once again proved its effectiveness.  The turnover reached €39,217,500, a figure up by nearly 13% compared to last year. The average sale price of €146,998 is the best ever achieved at an August sale; it showed a remarkable increase of nearly 9% compared to 2013. Also on the increase, the percentage of yearlings sold settled at 81.48%, a record high. Over the whole sale three yearlings were sold for €1 million or more, 16 for €400,000 or more and 54 for €200,000 or more. A wide range of buyers had once again made the journey to Deauville, flocking notably from the United States, Japan, China, South Africa, Australia, the Gulf (Qatar, Dubai, Bahrain, Kuwait) from Russia and from the whole of Europe.

ARQANA chairman Eric Hoyeau was most satisfied with this August sale: «The superb results of the August sale prove that Deauville is more than ever a stronghold at the international level, attracting an audience as large as it is varied. This year the huge number of new faces and the depth of the client base in every price bracket were particularly remarkable and are a testament to the genuine strength of the market at Deauville.  The quality of the horses on offer and the recurring success of graduates of the sale as well as the well-known attractions of Deauville create an unbeatable package for buyers hailing from all over the world. And of course, the excellence of the French racing system, of our infrastructures and of French industry professionals attracts an increasing number of foreign owners with the ambition of developing a high class racing operation. The dynamism of the August Sale bodes very well for the v.2 yearling  sale, which  will be held for the second  time tomorrow  and for the October  Yearling  Sale.  Finally,  I  would  also  like  to  congratulate  the  formidable  work  put  in  by vendors to get yearlings of such quality to the sale as well as that of our teams and of the FRBC who put in such considerable effort for this sale to be a success and I wish every success to the buyers of the 270 yearlings sold since Saturday. »